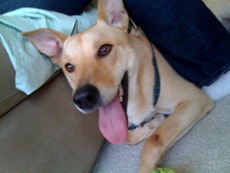 Hope is currently about 1.5 years old and was labeled as a shepherd/lab mix when she and her brothers, Hercules and Finn, were rescued from Bakersfield back in August of 2009. Since then a doggie DNA test has been done showing that she is husky, pointer, boxer and pomeranian. She is currently about 70lbs. She can be shy and submissive in new situations so will need a patient, loving family to help her build her trust and confidence. Hope rides well in the car and knows her basic commands. She learned new commands everyday in her foster home such as "bed" and even cries at the back door to go potty. Check her out in action here - http://www.youtube.com/watch?v=XpcGG8NOZ5k She has been making regular trips to the dog park and everyday comes a little closer to letting loose and just having fun. She doesn't mind sharing her toys and food with others and is very eager to please whenever treats are involved. Hope is getting a fresh start with her new family in Sunnyvale, where she'll live with children and a cat. 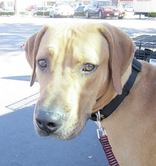 Oliver may just be the best looking hound dog out there. He is estimated at only about 2 years old and may be mixed with a lab. He gets along amazingly well with other dogs and is a mellow, quiet boy. He enjoys getting attention and wants nothing more than a great family to constantly love on him. He gladly greets every new person and dog with a big grin and wagging tail. He also walks fairly well on a leash and is so far showing promising signs of house training. Oliver can be a little hesitant in new situations so will need someone with patience. Another dog in the home would be excellent for him, since he is a big follower. Sweet Oliver is starting the next chapter of his life with his new "mom" in San Jose. 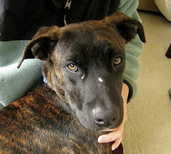 Brody is a 5/6 month old pit mix who is as sweet as they come. He literally only had hours to live, simply because there was no space left at the shelter, before Copper's Dream gladly stepped in to rescue him. Having just been rescued, Brody is a little unsure about new experiences right now, but with some gentle reassurance he acclimates quickly. He has not shown to be food or toy possessive, and loves to wiggle into your lap and get close for a cuddle (where he's happy to stay for a nap!). He was completely mellow in his bath and now his beautiful brindle coat really stands out. Here's a video of him after his bath: http://www.youtube.com/watch?v=Zpul_52uCH0. Brody is already walking well on leash and knows how to "sit." Brody gets along well with other dogs and people but needs some confident coaxing to assuage his initial unsureness. Brody's gentle, sweet temperament would make him an ideal companion for any loving family. Brody has found that loving family in San Carlos, where he is living with another dog and two children.

Niko was rescued from Merced after being found as a stray. He is estimated at about 1 - 2 years old and believed to be a pomeranian mix possibly with american eskimo. He is definitely in the spitz family and probably about 20lbs. He is the perfect size to easily be your jogging partner or lap dog. He is a friendly boy with a constant grin always looking for new people or dogs to meet. He would be happiest with regular exercise and being able to join in the family activities. After Niko had a nice bath and a little TLC to his coat, he transformed into a gorgeous boy who will surely catch anyone's eye. Niko now lives with a family in Pleasanton with two teenagers.

McKenna is about 8/9 months old and chihuahua/terrier mix. She is currently under 15lbs, just the perfect size for any environment. She is a very sweet girl who loves to spend time cuddling and doesn't even mind being held. She was rescued from a rural central valley shelter where she passed her temperament evaluation with the all the highest marks possible. She has plenty of puppy energy and loves to roll around in the grass and enjoy the sunshine. She also loves her rawhides and plenty of toys. She gets along with other dogs and even cats. She walks well on a leash, knows some basic commands and hasn't had accidents in the house for quite sometime now. McKenna is now a part of a family with two children, enjoying her new home in Lafayette. 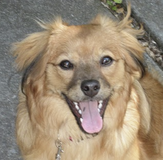 Alice was originally estimated at about 5 months when she first arrived back in March, but may actually have been 1 -2 years already. She is a fluffy, gentle spaniel mix. Unfortunately Alice is looking for a great home once again at no fault of her own. She is a little shy upon a first meeting but will warm up quickly. She loves to play and also loves to cuddle. She gets along with everyone-- kids, cats and other dogs. She would make an easy fit into any household ready to share their love. Alice loves her walks and is also crate trained. Alice has gotten another chance at a forever home and is now living in San Francisco.

Mama Blue is 5-6 year old pit mix who loves all people and even does great with children as young as one. She is a real love who just wants to curl up or even lay in your lap if you'll let her. She walks well on leash, has great house manners, and respects her caretakers. Due to Mama's unfortunate past she should be the only pet in the house at this time. She was confiscated from a home down south near Bakersfield along with her three pups. One pup was adopted through the shelter but Mama and her two babies had run out of time. They spent over a month in the shelter waiting for the case against their previous owner to close. He was convicted of animal abuse/neglect. Copper's Dream agreed to take her two pups but after meeting Mama and being greeted with the biggest pittie smile ever, there was no way she was going to be left behind. Everyone was well aware of what her fate would be if Copper's Dream did not take her. One smile from the most loving and loyal dog you will ever meet was all it took, in the van she went on her way to a better life in SF. After observing Mama's behavior outside the shelter environment it is clear that she does not like some dogs. We have no idea what her life was like before she came here, but after speaking with some trainers it is believed that she is just extremely under-socialized. Basically she never knew life outside the yard she was rescued from. Thanks to the help of Best Friends Pet Resort in Patterson, CA and the volunteers at Westside Animal for Adoption, Mama Blue has finally found that special forever home she deserves! 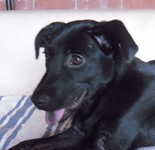 Lulu is a medium sized girl at about 6-8 months old. She was found as a pup on the streets of Taiwan with a broken leg and so emaciated that she could barely stand. That was over six months ago and Lulu has made an amazing recovery. She absolutely loves people and gets along fine with other animals. Lulu's good fortune continues! She has found her forever home in San Francisco. 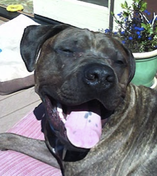 Bug is a 12 month old shar pei/pit mix with a giant heart just exploding with love. He is extremely smart and listens well to direction. He has great leash manners, knows sit and can stay for short periods of time. He is house trained and loves his kennel. With the simple command "kennel" or point of a finger and he will gladly go in for some R&R. Bug has lived with cats in the past and after the first excited introductions he does fine with them. He is still working on the proper way to interact with other dogs, but can and has lived with them in the past. Bug will need an active household who can provide him with plenty of regular exercise. He loves to go for walks, runs or even bike rides. He also loves to play fetch and has even learned how to toss the ball himself. Bug came to Copper's Dream extremely under socialized and scared of almost everyone and everything outside the home. It has been a truly rewarding experience to see him come such a long way. This special, deserving boy has found a wonderful home in Santa Clara. 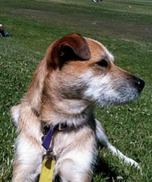 Foxy Roxy is a loving, 1- 2 year old female terrier mix (imagine a basenji/jack russell mix... we know, "unique") and possibly shar pei, rescued from being euthanized at the Los Banos shelter. She's very good with people, including older children, though she is sometimes cautious at first with men. Probably because of a lack of training and socialization during puppyhood, Foxy does have some issues interacting with other dogs. With submissive dogs and young puppies, she does very well if introduced to them properly and can live with them in the same household.  However, as a very strong alpha personality, Roxy cannot be placed in a home with another dominant dog. Like a good terrier, Roxy has occasional energetic playful bursts, but for the most part is even-keeled and very loving. Her favorite past-time is running up and putting her head in your lap and looking at you with her big brown eyes so you will shower her with affection. Roxy nuzzled her way into the hearts of her foster parents and will now get to stay on in San Francisco as a permanent member of the family.

Lovely little Lucille is a sweet white and gray pit mix, who is about 45 - 50lbs. She was rescued from a rural central valley shelter where her "owner" discarded her after she was no longer useful. She is probably about 2 years old and has clearly had a rough start to life. Although her spirit is in dire need of uplifting, her trust and love for humans has not been broken. She loves people and does great with dogs, but sorry no cats for this girl. She needs a home where she will be showered with love and given plenty of time to come out of her shell. She is on the shy side and currently a little jumpy with loud noises, but wants nothing more than to be able to play carefree and just be a happy girl. She walks great on a leash and is house and crate trained. She is also extremely gentle with all people, kids and even during play with other dogs. She would also do best with another doggie playmate to help build her confidence. It took a couple hours for her current foster sister Maggie to break through that wall, she was persistent and determined. It totally paid off and Lucy turned into a completely different dog. Now, Lucy is feeling the love in Menlo Park with her new family and her doggie sibling.

More to be uploaded soon!